Relaxing day out watching seals sunbathing on Blakeney Spit.  Large colonies inhabit the Norfolk coastline seemingly undisturbed by the curious gazes of humans and they provide great entertainment for all the family to enjoy.

Hubby and I recently found ourselves at 7.30am standing on the quay at Wellsswaddled in fleeces and waterproofs because it was a tad windy and damp. However before too long our prayers for sunshine paid off and the day turned into one of those days that artists love, crystal clear light and visibility, with scudding clouds racing across a sailors blue pants sky.

We were about to have a day out seal watching.  Our destination the sandyBlakeney PointSpit, to watch and enjoythe sealsbasking on the sand Eight very good friends who were joining us, arrived spilling out of their cars laden with picnic baskets, fleeces, blankets, cameras, kitchen sinks not to mention vast quantities of wine! 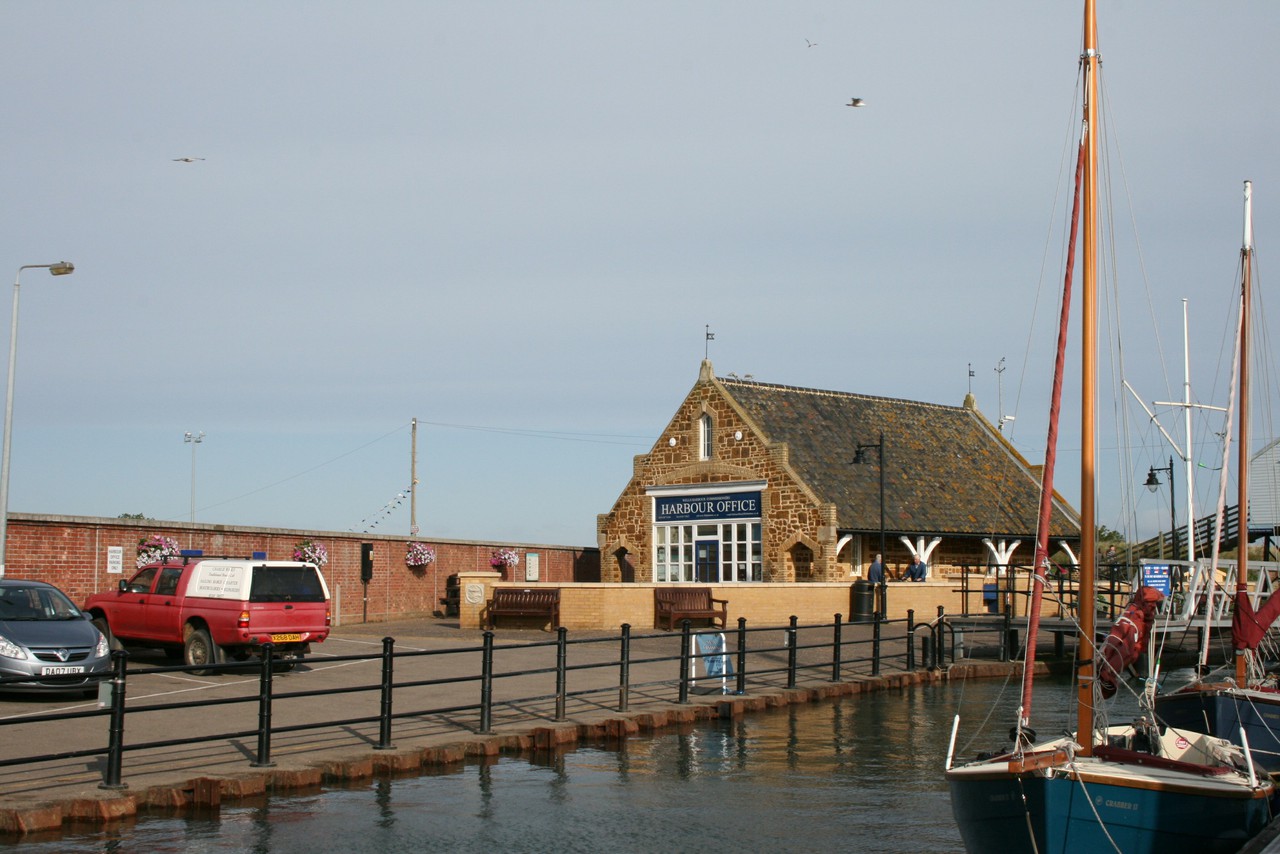 We found our way down the dock and heaved ourselves on board our gallant little ship and the crew showed us around the boat, telling us what not to put down the loo and stowing our huge amounts of luggage (you would think we were setting off for a two week holiday in Holland than spending just one day on the boat).

The fun started when we had to put on our lifejackets which were stowed under the cushioned benches where our bums were parked - of course without leaving our seats. All I can say is, for those who are not sailors, a lifejacket is not an easy beast to fit properly over extra layers of clothing - too many straps with not enough give for those of us with big boobs or tummies - God help you if you blessed both! 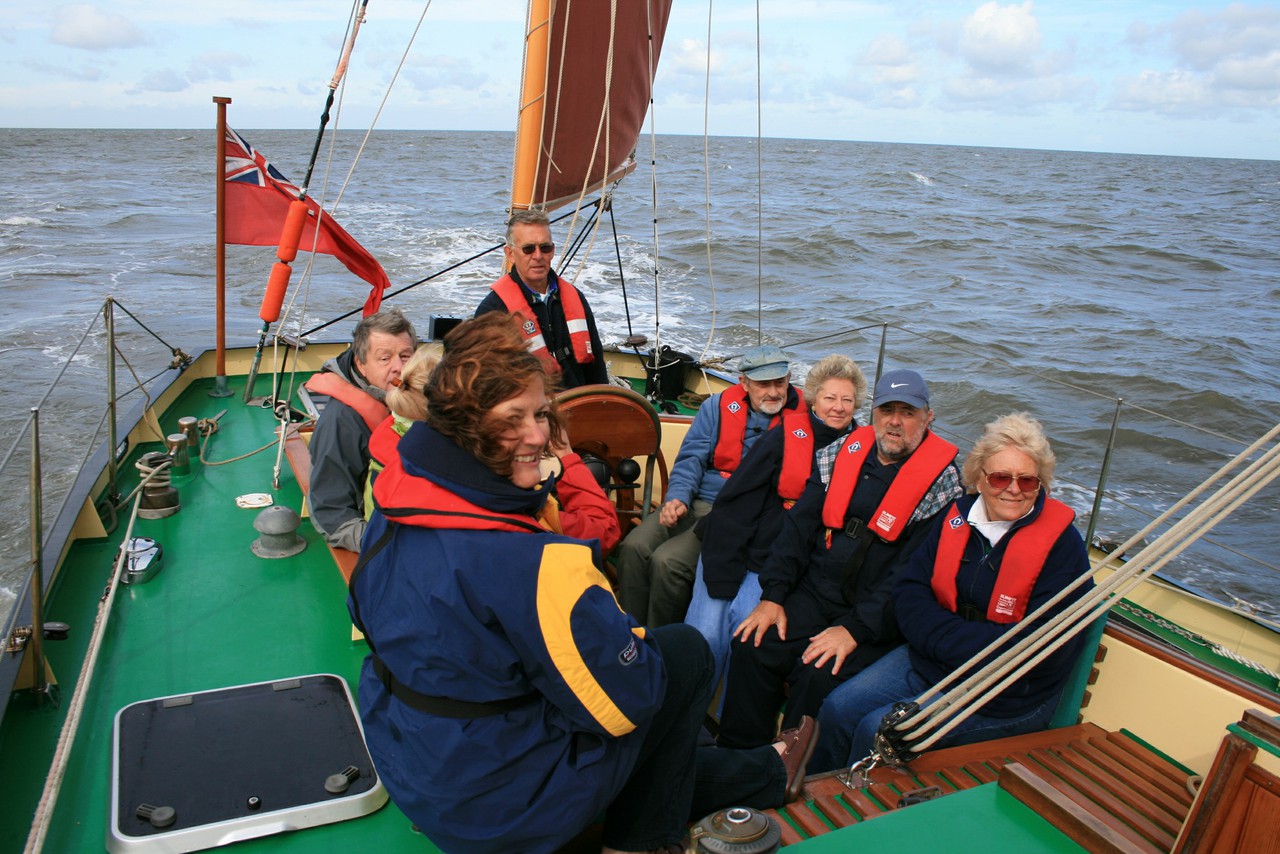 Amid loud grunting, gasps, and holding in of stomachs, elbows in eyes and much giggling, we managed to fit them on just in time as the boat pushed forward on an ebbing tide, gliding past all the brightly coloured beach huts and the Lifeboat station. 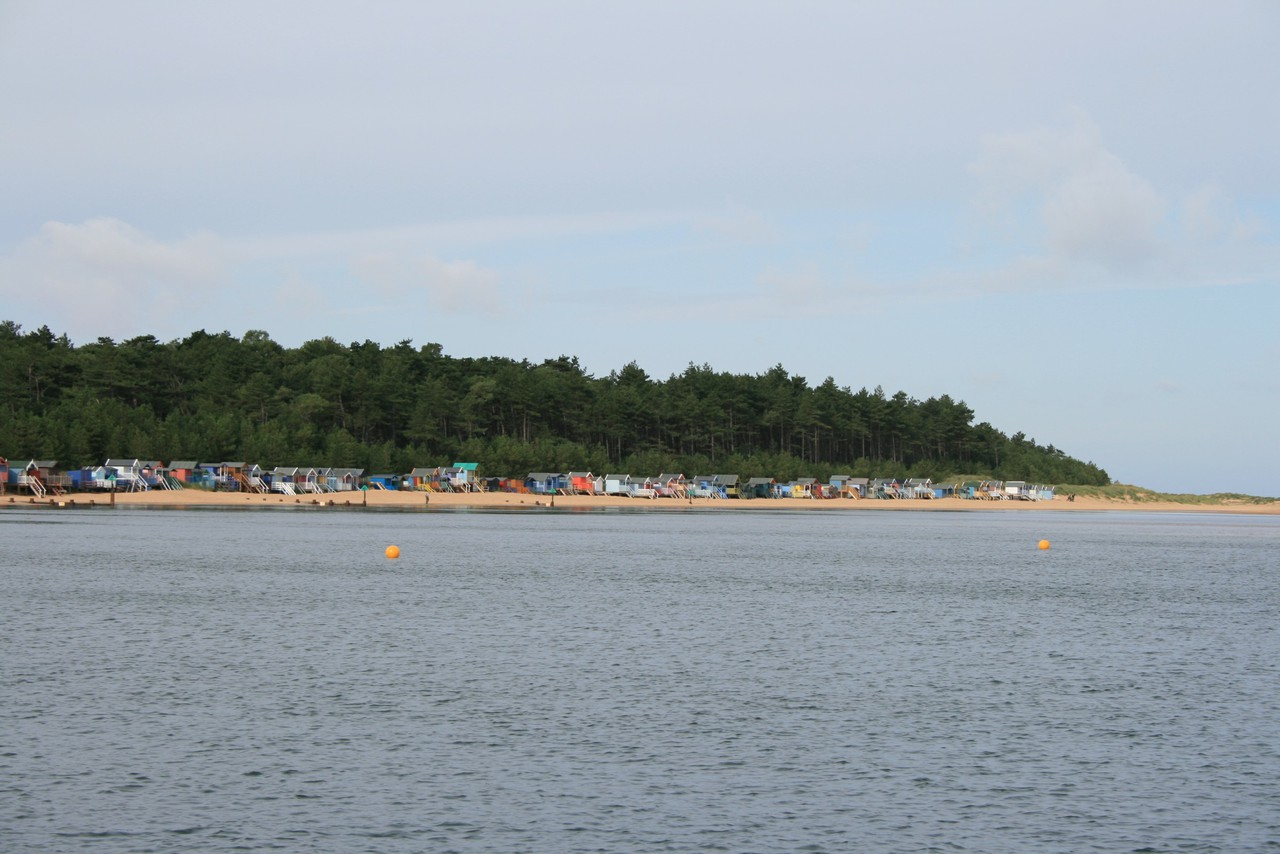 As the boat reached the open water, the crew shook out the sails, stopped the engine and set a course for Blakeney Point. The wind was blowing hard enough to make the boat scoot along at a good clip with the spray flying across the deck and covering the would be sailors in a fine coating of salt. Sadly before too long we reached our destination and our ever efficient crew dropped the sails and we gently cruised under power toward a spit of sand.  The seals too many to count, were basking in the sun with their tails and heads lifted towards the warmth like giant sausages waiting to be picked up and dipped into bbq sauce. 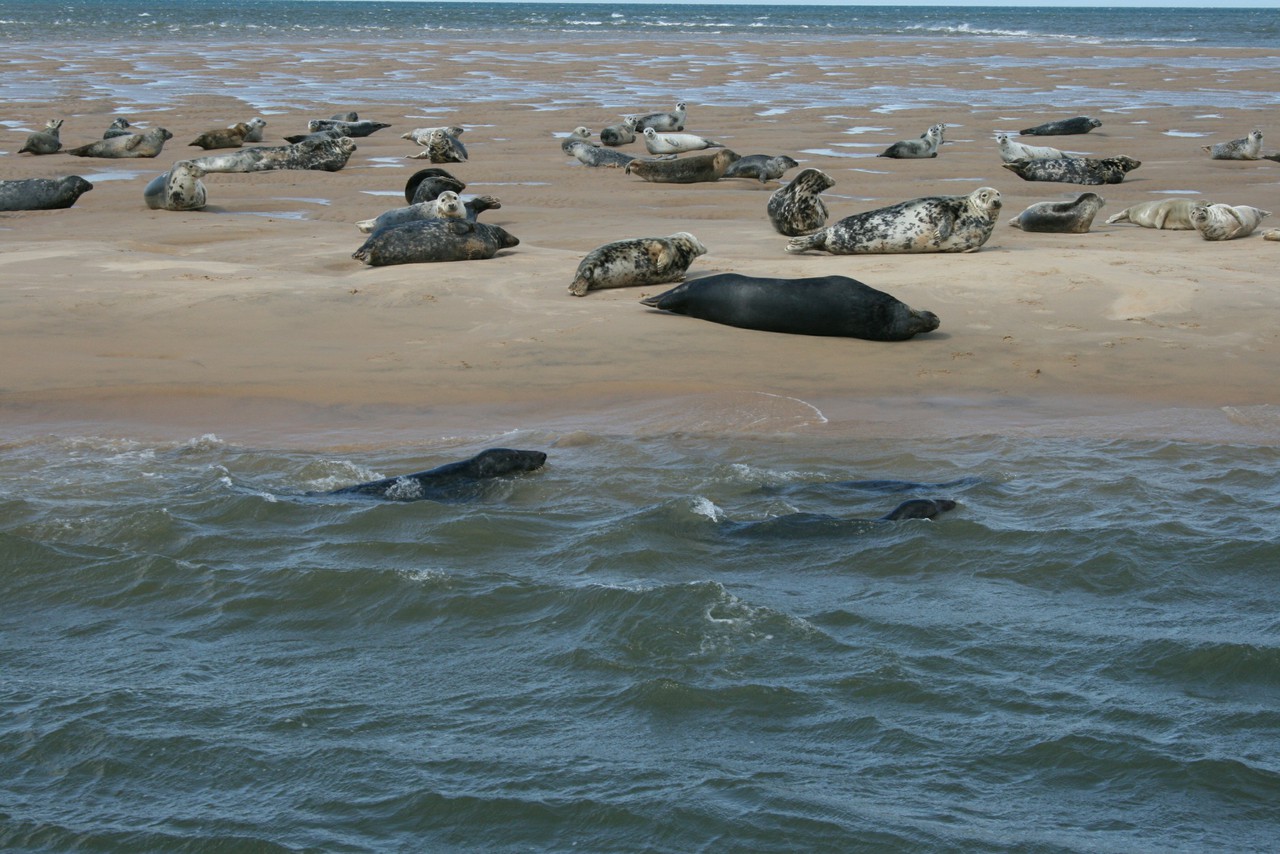 We dropped anchor in the quiet waters of the inlet a scant 12' feet away from the seals and waited for the water to go and for the boat to be marooned high and dry. The boat settled gently, perfectly upright and almost wriggled her backside with pleasure to be finally ashore and resting.

Well now what to do for the next 4 hours? The only thing you can do in that situation short of putting the kettle on is to break out the grog! We suddenly all found our appetites were well and truly wetted and we eagerly tucked into the fine spread of food which magically appeared out of all those bags that we had heaved on board.

Finally the water had gone leaving the most wondrous impressions in the sand, ripple upon ripple, swirl upon swirl a complete sculpture of a landscape ever changing with each new tide. A ladder was brought and tied to the bowsprit and we were expected to climb down it and onto the sand. Several of the party decided that the bunks seemed a better option and disappeared down below to sleep of the excesses of lunch. 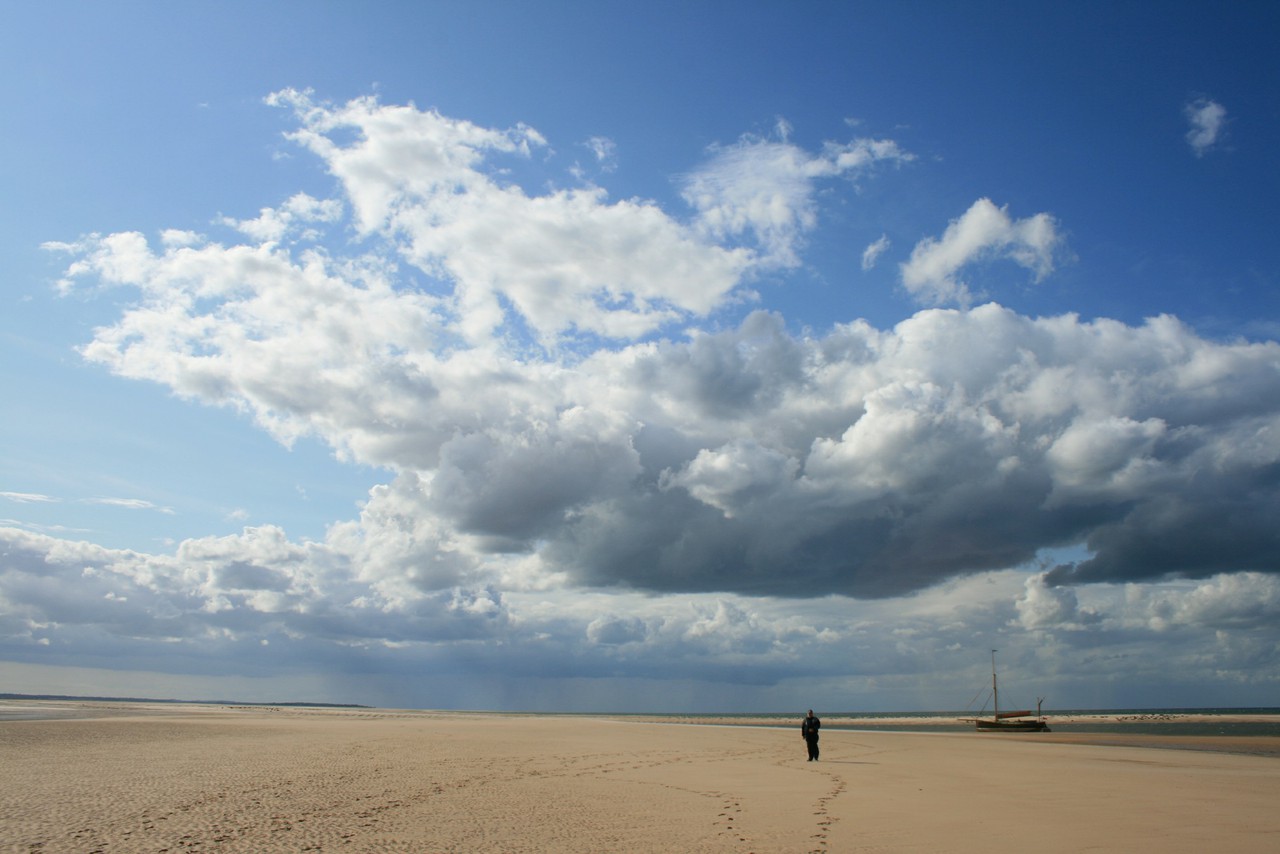 The rest of us gingerly navigated our way downwards onto the sand and with the sun behind our heads and the wind propelling us forward set off towards the distant dunes armed with nothing but a camera and a piece of toilet paper in case.... Several lagoons away, we came across a wreck which lay mostly submerged under the sand - only a part of the boiler remained recognisable, barely large enough for one person to stand in. 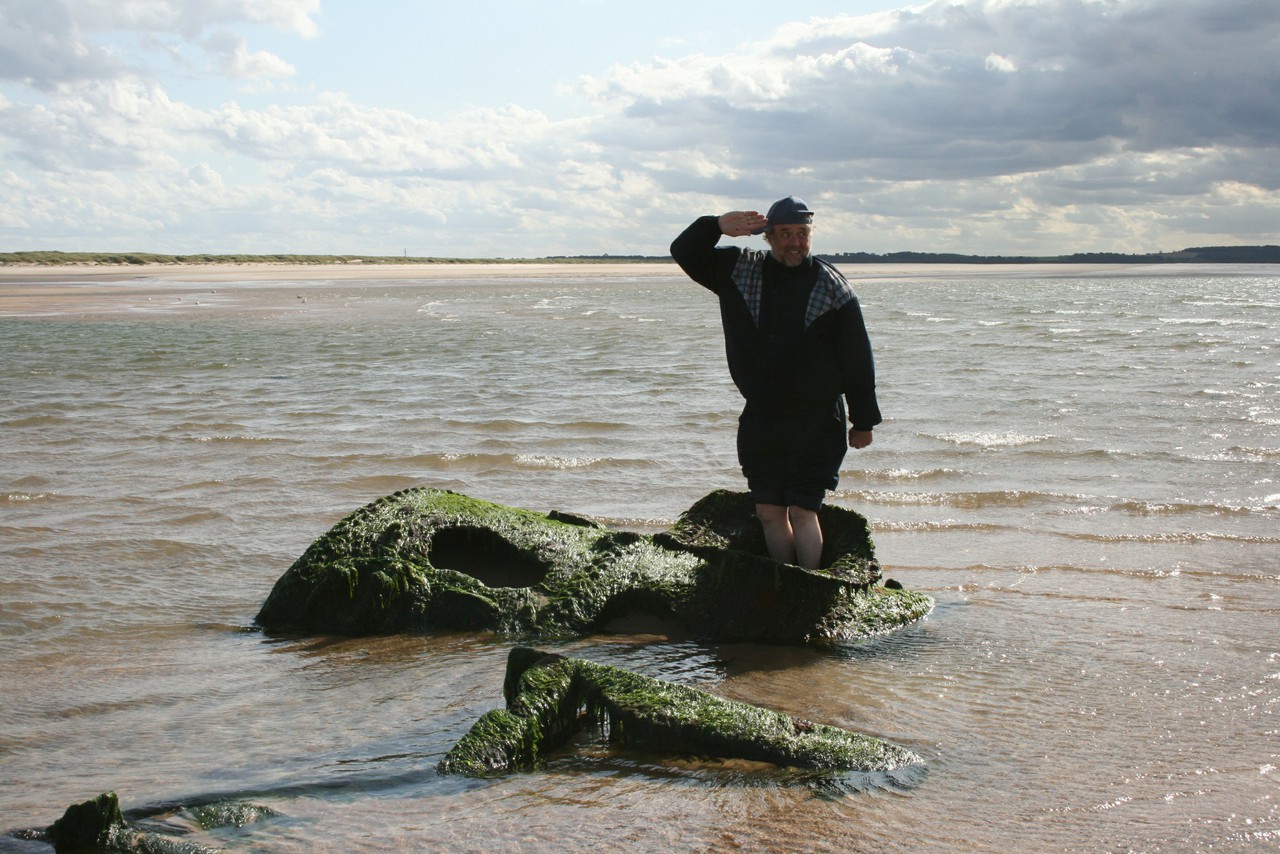 Well what can I say, there was no one around to see us, so what if 60 somethings behave occasionally like 10 somethings. We splashed through the lagoons (crikey the water was cold), chased stranded crabs and we pretended to be Captain Bligh or Jack Sparrow (depending on age) in charge of the fine ship Woebygone, marooned on a desert island 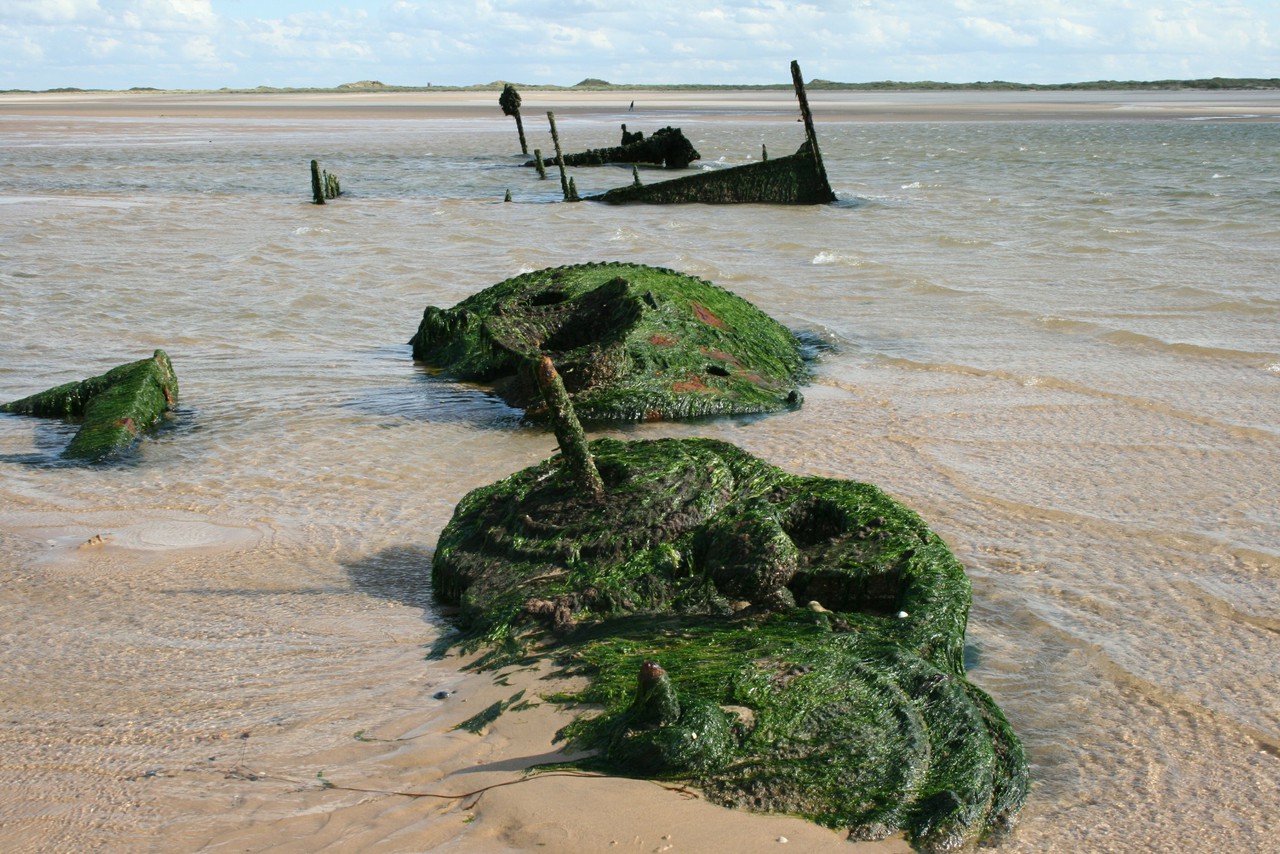 The sands around Blakeney Point provide such a beautiful desolate landscape with only the calling of the seals and crying gulls interrupting the distant sound of the sea and we watched the cloud formations charging across the sky dominating the horizon in every direction. Observing the force of nature seems so good for the soul. 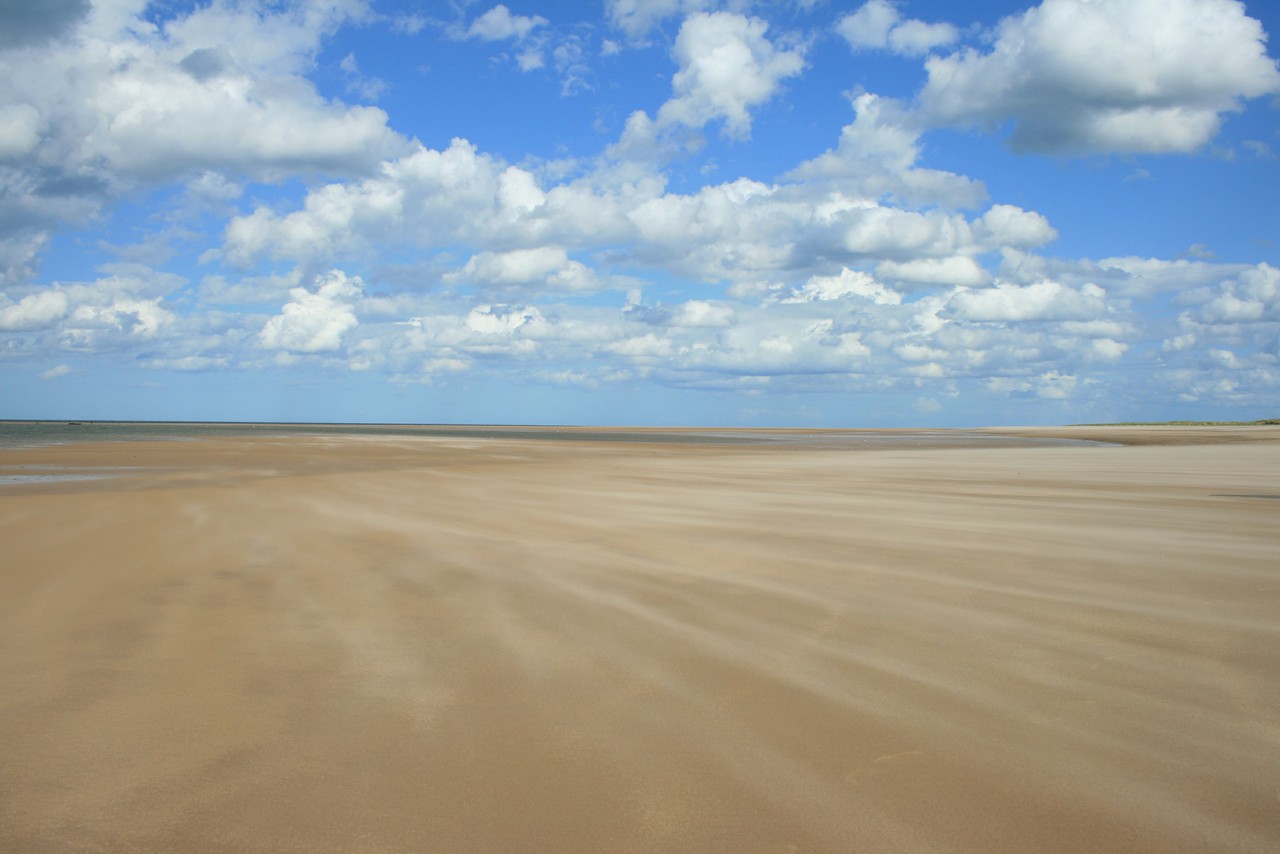 The wind puffed away causing clouds of sand to fly almost horizontally across the beach, reducing visibility, stinging our bare legs and feet and hardening the sand into ridges, making the inward trek back to the boat a lot less pleasant than the outward one!  We climbed the ladder back to the safety of the boat's cockpit and watched the foaming water rushing back around the hull. The seals were basking in the sun on their rapidly reducing tiny piece of sand, taking full advantage of the heat before they too, were covered by the creeping water. Before long it was time to start the engine, power back off the beach and set a course for Wells.  Sails unfurled and pulling hard, the boat set off into the wind and sea, bolting for home like a starving Labrador at suppertime!

The trip back was exhilarating. We found ourselves shrieking with laughter as the boat plunged over each wave, the wind causing great sheets of spray to whip across the deck, hitting us full in the face. That together with the run off swirling around the cockpit, took barely five minutes before all of us were soaked through to the underpants! People are so funny when caught in adversity. I can guarantee that if this had soaking had happened on a trip to the supermarket, laughter would have been the last thing coming out of our mouths!

Before we all turned into pillars of salt, we found ourselves sailing up to the channel leading into Wells Harbour, the sea calmed, the pitching stopped and we managed to catch our breath. Our crew dropped the sails and the brave little ship powered her way slowly into the harbour on the incoming tide and to our great regret, it was the end of our Great Adventure.

We all clattered ashore with our baggage which was just a bit less that we had brought and made our way back along the dock to begin our journey home.

Of course, the delights of Wells next the Sea diverted us and we found ourselves trooping into the local establishment for a wonderful seafood supper, although where we managed to find space to put it after our onboard delights...maybe the sea air just worked up everyone's appetite! En route to our table, we were stopped by a complete stranger and asked if we had just come off that boat and was it available for hire and was it good (he must have had a good idea because of all our salt encrusted faces)?.....In unison we chorused “Oh yes, and worth every penny”.

For those without sea legs the Beach at Horsey (just a short walk from from Horsey Mill and Dyke on the Norfolk Broads) there is  a large colony that gather to give birth and breed in October and November.