A little snippet of history about the rich heritage and culture of Norfolk.

History of the Norfolk

Taken from the Old English “North Folc” meaning land of the north people, known also as the East Angles, Norfolk is county steeped in history.

Celtic Queens, Roman Empires, Saxon and Viking rule have all shaped the county into that which we see today.

At the heart of the region is a vital clue to the origin of human occupation in Britain, offering insight into the genes of the county’s heritage. Just south of the city of Norwich the remains of a Neolithic wooden henge lay buried, and some of the earliest artefacts attributed to Prehistoric European man (2,500,000 to 3000 BCE) have been uncovered within the county’s borders.

It is known that during the latter stages of the Bronze Age (3000 to 600 BCE) North Norfolk was a major centre for the production of metalwork and by the late Iron Age (1200 to 500 BCE) the county was heavily farmed.

Discoveries of coins and other artefacts also lead historians to believe that Boudica’s Iceni tribe may have lived in what is now Thetford during the mid 1st century AD.

The Norfolk which was conquered by the Romans in 43 AD, was markedly different in geography from that which we know today. Dominated by the eastern estuary known as The Wash, this stretch of water has retreated back towards the ocean by a substantial amount. For the Romans it would have been a prominent feature within the landscape of west Norfolk.

Building roads and forts in great number the Roman army was soon established within the county. Although thanks to the efforts of an Iceni rebellion against Roman rule, Boudica’s King Prasutagus was given control of Norfolk until his death in 60AD.

It is recorded that at this time Boudica tried desperately to succeed her husband, however the Romans tried to exert their power over the area by raising the taxes.

Despite leading the now famous rebellion in which the Iceni tribe marched on the towns of Colchester (Camulodunum), London (Londinium) and St. Albans (Verulamium), the Romans assembled an army of troops from the outlying regions and all but destroyed the Iceni.

Establishing administrative centres at settlements which were built at river crossings or road junctions, the Romans restored order to the region and communities began to flourish.

The capital at the time was the town of Venta Icenorum which was located just a few miles south of today’s central hub of Norwich.

The Romans regained control of the region until 410 AD when the Saxons began to establish strongholds, one of which is believed to have been at Tombland known then as ‘turn land’, meaning open space.

While the majority of modern British cities were founded by the Romans this is not the case for Norwich.

Settling in alongside the Iceni tribes, the Saxons populated four main areas aside the river Wensum. Norwic, Coslany, Westwic, & Conesford and a number of outlying settlements formed the start of the city of Norwich. Norwich being its modern name, originating from the region of Norwic on the river’s north bank.

During the years of Roman rule the swamps of west Norfolk dried out and the land was then converted into fertile acreage for farming, cattle rearing and salt production by the Saxons.

During their tenancy the Saxons also built forts along Norfolk’s shores as a defence against overseas raiders, the ruins of a number of these tactical structures still remain.

Despite their best efforts to protect Norfolk’s shores the year of 840AD saw the arrival of the Vikings. This served to further influence Norfolk’s already multicultural Anglo-Saxon heritage.

Sailing their ships up the river Yare the Vikings began to make isolated raids on the rural Saxon settlements until in 866AD, the Vikings invaded East Anglia and the Saxon strongholds aside the river Wensum.

The Anglo-Saxon Chronicles, one of the few surviving records from the period, details the event - "and the same year came a large heathen army into England, and fixed their winter-quarters in East-Anglia, where they were soon horsed; and the inhabitants made peace with them."

By the beginning of the 8th century the Viking’s grip had loosened and the Saxons took back much of Norfolk. Little evidence remains from the Viking occupation except in the names of rural towns and villages, and in the names of Norwich’s streets and lanes.

The first written record of many of the county’s place names is in the 11th century Domesday Book, however these names will have existed much earlier.

The earliest known reference to the name Norwic is on a silver coin from the reign of King Athelstan in 930AD. As coin mints were only set up in fortified towns this suggests that the village which would become the medieval city of Norwich, was already making tracks to become the cultural centre we see today.

Tombland soon became the focal point for industry and trading, and the village whose name adorned the fortification’s coins moved south of the river to the site on which the city sits today.

In 1004AD the Vikings returned and wreaked havoc; plundering and pillaging they burnt the city to the ground. A little over sixty years later just as life had resumed its course and the city was finally rebuilt, the Normans invaded taking hold of the entire county and the city’s thriving trade.

At the time of the Norman Conquest Norfolk formed part of the earldom of Harold I of England, and offered no active resistance to William the Conqueror.

With Tombland still at the centre of city life, the Normans looked for high ground close by on which to build a castle. Plans for the royal home were drawn up and the Saxon dwellings at the end of the Ber Street ridge cleared to make way from the building’s timber frame.

Establishing a new city centre aside the castle, the land to the east of Tombland was given to the church and work began on the cathedral in 1096. Two hundred years in construction, each block of facing stone was shipped over from Caen in Normandy as no native substitute was deemed of equivalent eminence.

1100AD saw the start of efforts to replace the current timber castle with stone, although this structure was constructed using locally sourced flint one of the few rocks in abundance throughout the county.

Early mediaeval Norwich grew into a cosmopolitan city and expanded around the waterfront and west along St Benedict's Street. Religious tensions and the arrival of the Black Death in 1349 served to facilitate changes to the city’s population and economic status over the following centuries.

A great wall was built to enclose the city limits, and an influx of immigrants from the rural villages brought about a surge in the city’s profitable textile industry creating large civic wealth.

Tolls were enforced and industry flourished as more and more people utilised the city market. As such specialised markets appeared, their existence evident in the street names defining their location; Haymarket, Timber Hill, Maddermarket and Hog Hill.

During this period the rural inhabitants of Norfolk were largely arable farmers. The most densely populated and intensively farmed region in England during the 14th century, Norfolk was a prosperous county and this was echoed in their socioeconomic existence.

Over twenty castles were built in Norfolk during the Middle Ages some of which lay in ruin still, and can be explored on foot.

Central to medieval life in Norfolk, as with the rest of the country was the church. Far more parish churches were built in the county of Norfolk during this period than anywhere else in the country, Norwich alone once encompassed sixty-two.

Fires in Norwich during 1412 and 1413, and the War of the Roses contributed to Norfolk’s decline in the 15th century. This period is categorised by a growing increase in the divide between the wealthy and the poor.

When the city closed access to local lands outside its walls, thousands of people joined Robert Kett in protest forming a large organised camp at Mousehold Heath. Despite their best efforts to take the city, the protest ended in a bloody battle and Kett’s capture.

By the 16th century Norwich was paying more in taxes than any other provincial town in England, however just 30 of the city’s inhabitants controlled over 40% of its wealth. Increasing taxes and regulations forced many out into the rural villages from whence their ancestors came, and Norwich’s textile industry saw a fast decline. This was not helped by major fires in 1505 and 1507 which devastated large areas of the city.

Years later in a bid to try and revive the ailing textile industry, a group of Dutch weavers were invited to take residency in Norwich to produce russels and sateens. An influx of religious asylum seekers from the Low Countries saw the population spike and reboot the city’s industry.

Peat extraction which is thought to have been initiated during the Anglo-Saxon period and is responsible for the formation of the Norfolk Broads, also contributed to the county’s industrious success.

Further outbreaks of the Black Death and the English Civil wars offered further change to the county and the city of Norwich.

While the only serious fighting in Norfolk during the civil war took place where Royalist sympathies were strongest in Kings Lynn, 1646 saw large scale rioting and unrest caused by tensions between supporters of a more traditional culture and the Puritans.

The arrival of the 18th century brought exciting progress to the county. 1785 and 1786 saw the first aviation activity in the county in the form of piloted gas balloon flights, however a long depression in English agriculture and industry set in during the 19th century. This reduced estate incomes and put severe financial pressure on the gentrified owners.

The 20th century brought with it the First World War. Norfolk was one of the first places on earth bombed from the air when German Zeppelin airships raided the county a number of times. 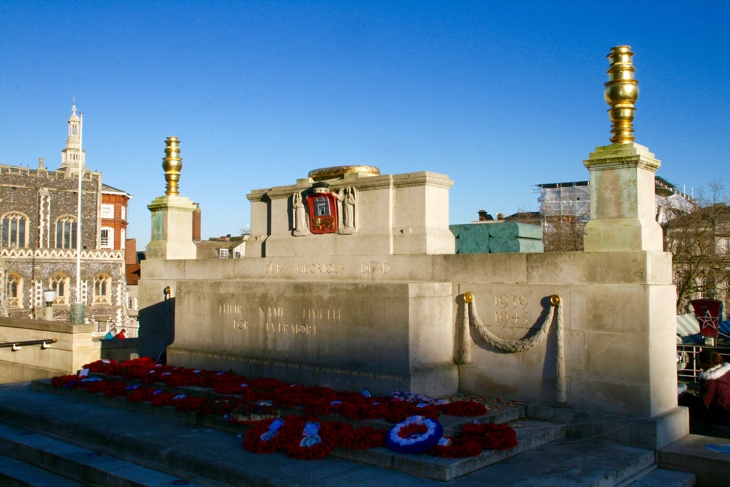 Developing a key role in aviation during WWI, WWII saw a massive expansion in this area with the growth of the Royal Air Force and influx of the American USAAF which operated from a number of airfields in Norfolk. Large numbers of Norfolk’s men were called up for duty during both conflicts. These numbers are reflected in the war memorials which stand tall in almost every village within the county.

Today the county is a thriving example of rural British life.

Over 20% of employment lies in the agriculture and food industries. Much of the county’s flat arable land is still farmed today and produces sugar beet, wheat, barley (for brewing) and oil seed rape.

A popular tourist destination Norfolk encompasses a number of Britain’s finest beaches which attract holiday makers in their thousands during the summer months. From the bright lights of family favourite Great Yarmouth, to the idyllic wide open plains of North Norfolk’s rugged coastline the county’s landscape is still one of vast diversity.

The city of Norwich fuses culture and heritage, both modern and historic, and remains a central hub for the region’s visitors and inhabitants. A vibrant cultural quarter surrounds the market place which remains at the city’s heart, and a flourishing arts scene packed with museum exhibits, artesian producers, theatre and live music provide Norwich with a rich and diverse appeal.

Having retained many of its historic buildings both public and private, the county’s Heritage Explorer trails offer a superb way to explore Norfolk's archaeology, and attract inquisitive visitors year round.

The land of the north people has come a long way since Boudica and the Iceni tribes called it home. So why not join us in ‘God’s Own County’ and sample the rich cultural heritage for yourself?